I'm just about to remove a set of these from my KLR. The rear got 3300km and was very poor for the the last 500km. With just about all braking traction gone. The front is still quite deep in the tread and has those directional problems when new but after some wear seemed to settle down. When I was in picking up a new set of tyres for my next trip in a weeks time I had some discussions with my tyre guy about turning the front around. Will hang it in the shed and try it when I get back. I found the TA a pretty good all round tyre but with only 3000 good kms out of the rear it gives poor cost effectiveness. Half way through the use of the TA I fitted Ricor valves to the front suspension and this improved the way the front TA behaved. I hope they do some work with these tyres but for now not I tyre I would refit.
Top

Yes maybe the wider tyre is more durable. I would have fitted a 140/80 but they don't make one..
Top

1coolbanana wrote:Doesnt really compare as far as dirt traction goes.
If youre a fan of the 908 in the soft and technical stuff, I dont think youll be too impressed with the TA.
Better on the road but Im betting thats not what you bought it for

The 908 is a serious tyre, the TA is a compromise tyre.

Sigh....Ye I have tyres for the road and intended running these when playing in the dirt .... Oh well I have it now , might as well wear it out
Top

What are you running it on Mick?
Cowabunga dudes .......
Top 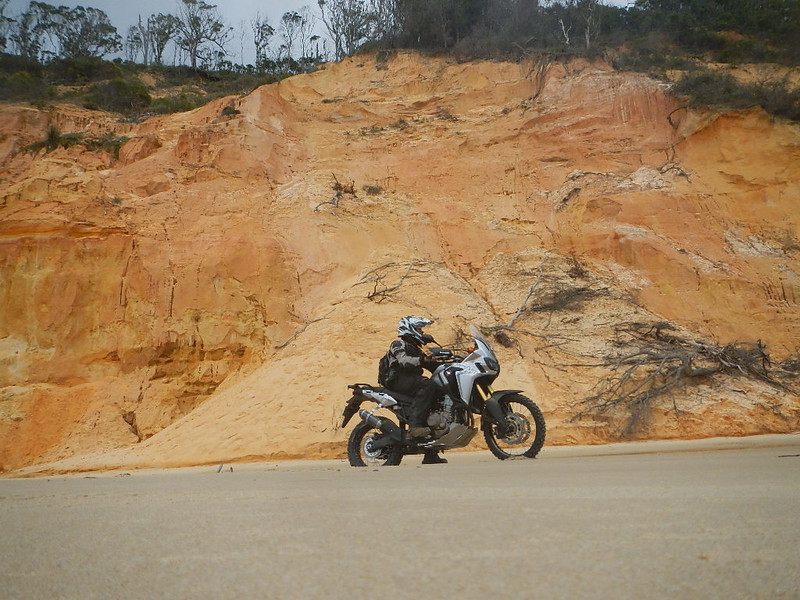 The Tractionator Adventure finally came to an end after nearly 8500 klms!

Although its particularly any good at anything, it is tough and it lasts....nearly twice the k's of any other similar tyre Ive ever tried!

My observation coming from Scorpion Rally STR.
On road: Scraped pegs & boots on Scorpions (that never happened before), Motoz though never left me wanting for grip either and leaned it over to almost scraping angle. When new, the Motoz rear every now & then feels like a bit of wonder in straight line. Almost like a flat tyre, but just briefly. I assume it is because of the big chunky blocks and whatever imperfections it picks up from the road. Motoz are louder than Scorpions, but on the 880km stretch home, it went a lot better in the noise dept than expected. The scorpions were only noisy between 60-80km/h with a weird cyclical drone almost. Suggested 32 PSI on Motoz rear, but I was too lazy to disable the TPMS warning light, so I upped it to 33/34 for off road. Upped it again to 40 PSI on the sealed road home, but boy did it start getting even more loose in the rear. Will drop it 37-ish and see how it goes.
Off Road: Scorpions under braking felt like dropping anchors. It stops VERY well. Motoz were very good on dirt, but felt a bit tail happy. The minute I get on throttle, it wants to overtake the front. Good for sliding it out of corners, but need to be very careful not to over cook it. Naturally it is also louder, starting at exactly 100km/h even on dirt roads.
So, for longevity and bang for buck, the Motoz are a fantastic choice. I would happily now do any event and not stressing about running out of tread. Loved the scorpions dearly, but 2800-3000km from a rear is TKC/Anakee Wild territory. If budget wasn't an issue, I'd do Scorpions, but for now it is the Motoz.
Top

How does the rear compare to an 805 or kenda big block?
Top
Post Reply
36 posts